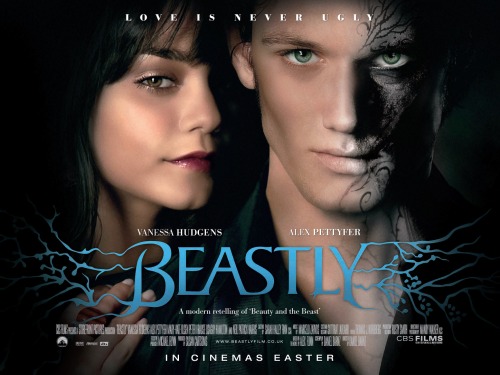 I realize I might be barred from ever reviewing another film but just hear me out. Ok, so I wasn’t asked to review this film, I wanted to.  I’m looking at this film from a screenwriter/fiction writer point of view. This movie was done beautifully. Yes it’s a bit dry and could use more tension viewers have to remember what audience this was geared towards – high schoolers, some with the attention span of a nat. I must admit, when I saw the trailer for this movie, I was a little more than intrigued. Then I found out that it was a re-telling of the classic fairytale, Beauty and the Beast. Naturally that got me thinking more about the movie and the visuals provided. I was eager to know if this movie had done the fairytale justice, if it was worth adding to my already large movie library, and more importantly, will it be worth the digital copy price. Well, having watched this movie over the weekend, I vehemently shout YES!

If I didn’t know this was based on a fairytale, I not sure I would’ve guessed it. But that’s not what excites me. The beauty of the makeup to turn Kyle (Alex Pettyfer, I am Number Four) into a beast was seriously artistic. And though at first glance Kyle in beast makeup was not gross, I understood why this character would consider himself a beast. Narcissistic doesn’t begin to scratch the surface of this fractured father and son relationship that seemed to begin when a young Kyle, desperate to keep his father’s interest and presence, accepts his father’s beliefs as his own until he himself begins to believe it. There were moments when the viewer saw that Kyle was quite aware of his ridiculous behavior. Only now he’s in so deep and has come so far on blatant absurdity that he’s mortally afraid of showing his true nature and losing all he’s gained — popularity, being worshipped by his peers, and no one to tell him no. Unfortunately for him, his schoolboy charm and prey mentality fails him when he needs them most and he is transformed into something neither he nor his father care to accept or want to recognize. But he is forced nonetheless to find himself, confront the person he has long hidden and find his way out from beneath the heavy falsehood and lie that has enveloped his life and persona.

The father Kyle so desperately clung to has all but vanished though he makes sure to throw enough money at ‘the problem’ that he feels vindicated when he goes on with his life and forgets his son. I wondered whether this portrayal was real but then realized there is always an element of truth in movies no matter how absurd it may appear. For sure I know parents like Kyle’s father who do nothing but throw money at anything they perceive as an interference in their otherwise ‘perfect lives.’ What irks me was that we never got to see if Kyle’s father learnt anything from his son’s ‘tragedy’ but the hint of what is to come from his new ‘intern’ made me smile.

I love the juxtaposition between the rich high school and the seedy, underworld surrounding it; Kyle’s home life versus Lindy’s; and the fact that as cynical as the world is, magic does exist. Another peeve of mine is the maid. I know what a Jamaican accent sounds like, I have one! But I fail to believe that they couldn’t find a Jamaican actress to play the role or another actress whose accent was more convincing. This has always been hollywood’s problem thinking that their viewers won’t notice the slip. Might I remind filmmakers that viewers are not as stupid or gullible as we once might have been and these inconsistencies are more annoying than cute. My advice: do your homework and take the time to get it right! Kudos to Alex Pettyfer whose performance made this viewer at first hate then root for him; Neil Patrick Harris for playing the role of a blind teacher so eloquently. Yes, I believed the character was blind. In its purest form, this movie is about the destructiveness of hate, the power of love, and the perseverance of human nature. Excitement overload!

This entry was posted in drama, fantasy, Movies and tagged Film. Bookmark the permalink.